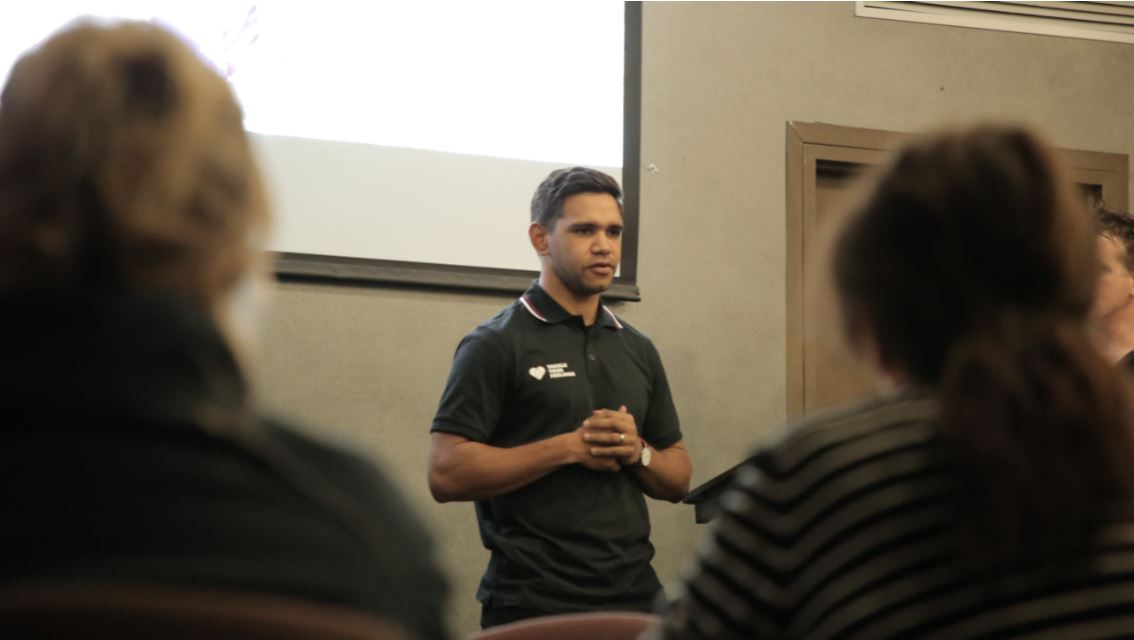 ON A SOAKED Cranbourne evening, a group of local Australian Rules football coaches were all eyes and ears as Melbourne’s Neville Jetta relayed an important message about mental health.

Sitting in the upstairs function room at Casey Fields overlooking the ground he spent many hours on early in his AFL career, the Demons defender was front and centre as a video of himself and wife Samantha detailed their mental health struggles.

The junior coaches from the South East Football Netball League listened intently on Monday as part of the Tackle Your Feelings program, an initiative that aims to give local coaches the skills to create environments that nurture thriving people.

The program, in its pilot year, is a joint initiative between the AFL Players’ Association, AFL Coaches’ Association and the Zurich Foundation and is free for attending coaches.

Jetta, an ambassador for the program, paid tribute to the influence of his junior coaches and said the program will change the way mental health issues are understood at community level.

“Knowing that the coaches of the next generation coming through are going to be better equipped and have better tools to be able to help their players and their players coming through, I can already see the benefits it will have immediately and into the future,” Jetta said.

“The AFL coaches, staff and players themselves have been leading the charge to have this program done within local footy clubs. It’s great to see the coaches and support staff doing a great job to promote mental health and create a shift.

“To have the coaches and staff at my football club understand what us as players are going through is really evident. The conversations we have are on a deeper level and we feel the space we are in is a safer environment and in turn our performance will be a lot better.”

The Tackle Your Feelings program is based on the eight-hour Mental Health Education Training workshop the AFL Players’ Association has rolled out to AFL coaches, players and staff from all 18 AFL clubs as well as player agents.

The program’s original objective was created to help those in the AFL industry better understand mental health and create a safe, healthy and prosperous workplace at each club before the AFLCA and AFLPA identified a need to deliver it to local leagues around the country.

Coaches from the Cranbourne and Berwick Football Clubs were well represented, with Eagles president Colin Moore keen for their senior sides to access the program.

“(A key takeaway) is to never judge because you don’t know what someone is going through on a day-to-day aspect,” Moore said.

“I think it’s really important that our coaches get involved because they’re at the forefront of the kids, the parents and the team managers.”

The League’s clubs were engaged through the Melbourne Football Club, who identified two of their regions, the South East Football Netball League and Central Football League in Alice Springs, as particular areas to target.

“We realise how much of an issue mental health is these days and we have a lot of kids who are at an impressionable age. It was really important for us to get an understanding of how to manage it,” Williams said.

“We recognise that it’s more than game day for our kids and the outside factors can influence how they play or whether they continue to play. It’s important that coaches have those skills to understand the different situations players might be in.

“We want to keep them interested in football but also be a support network as well.”